Almost 3,031 hectares of Hamilton Conservation Authority owned and managed property is made up of natural conservation areas, and plays a major role in the ecology and health of the HCA’s watershed.

HCA’s natural areas cost about $1,800 per ha per year to maintain (about $5 million in 2010 dollars) and our admission fees go back into our areas.

These lands were acquired and protected by HCA because of their sensitive nature and the overall role they play in the landscape-level natural heritage of the watershed.  Directly because of this significance, they are typically designated by the province or the municipality as Provincially Significant Wetlands(PSWs), Environmentally Significant Areas (ESAs), or as Areas of Natural and Scientific Interest (ANSIs). The actual designation is determined by many reasons, including significant hydrological function, rare habitat, or species at risk, to name a few.

Ownership by an organization such as HCA protects these lands from changes that could be detrimental to their sensitive features and functions.  These lands contribute to the larger natural heritage system in the City of Hamilton and surrounding municipalities, which allows for the greater protection of the watershed’s overall biodiversity.

The Beverly Swamp is 2324 hectares in size, of which HCA owns 920.57 hectares.  The rest is in both private and public ownership. It spans three watersheds — Fairchild, Spencer and Bronte creeks — and offers one of the best and largest lowland swamp forest representations in south central Ontario.  Parts of it can be accessed by hiking the recreational Lafarge 2000 Trail in the northwest end of the watershed.

This wetland is the source area for Spencer, Grindstone and Fairchild creeks and features a rich diversity of plant and animal life, including some that are rare to the Hamilton region.  The area functions as a natural sponge, maintaining hydrological balance over a large area and draining into both Lake Erie and Ontario.

Hunting is permitted at the Beverly Swamp as long as Ministry of Natural Resources and Forestry rules and guidelines are followed. See below for map of permitted hunting areas.

The Borer’s Falls/Rock Chapel area includes a forested section of the Niagara Escarpment.  The escarpment area provides habitat for many significant species, including the largest single population in Canada of Red Mulberry (a nationally endangered tree species).  The area is managed by HCA and the Royal Botanical Gardens as a nature reserve.  It also provides a link between Cootes Paradise and the Niagara Escarpment.

There are several significant bedrock exposures, including the vertical exposure at Borer’s Falls.  There are also Eastern White Cedar that grow along the cliff-edge as well as a small area of old-growth cliff-edge forest, unique in Hamilton and rare in Ontario.

Borer’s Falls Conservation Area features informal recreational trails and a wide variety of plants and animals, including large stands of lilacs.  The Borer’s Creek bridge offers a stunning view of the gorge.  Borer’s Falls is a classical, 17.7-metre waterfall, also known as Rock Chapel Falls.  The waterfalls once powered the Rock Chapel village sawmill, run by the Borer family for more than 100 years.  Land clearing in the area eventually altered the creek’s flow to such a extent that it could no longer provide sufficient energy, so the family switched to steam to power the mill.

Canal Park is located on King Street East in Dundas, along the Desjardins Canal. The site of the former Ben Veldhuis Greenhouses has been a part of a years-long brownfield restoration effort funded through donations to the Hamilton Conservation Foundation’s EcoPark Campaign. 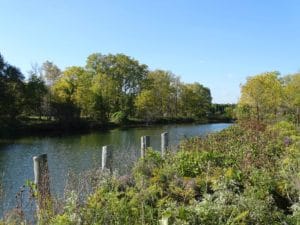 A soil cap has been placed throughout the property to help contain the remaining soil contaminants from the original site and plantings that have been done as well. Over time the vegetation will filter the contaminants naturally. The site is home to the last remains of the Veldhuis greenhouses: the chimney which has been preserved and reinforced to protect habitat for chimney swifts.

The site features a trail as well  as a new shade structure and canal viewing platform that are now complete at Canal Park. The structure offers visitors to the urban nature sanctuary a chance to get right up to the water.

This Niagara Escarpment natural area contains a mix of regionally important biological habitats, mostly made up of regenerating agricultural lands. The conservation area features passive recreation, including recreational trails and views of Lake Ontario and the Hamilton/Dundas areas.

This 59-acre conservation area borders Tiffany Creek, a tributary of Ancaster Creek, and includes upland woods and riparian wetlands.  The Ontario Ministry of Natural Resources has classified the wetlands as provincially significant.  The property has been identified as an Environmentally Significant Area since 1995.

The property is approximately 30 per cent broadleaf forest, 30 per cent successional forest or thickets, and 40 per cent meadows or wet meadows/marshes.  It is a groundwater discharge area and considered an excellent wetland habitat for numerous plants, animals, butterflies and birds, including some rare species. 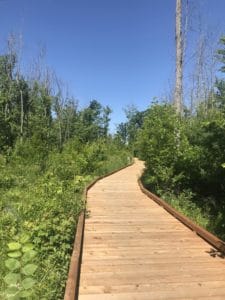 This swamp forest is the biggest natural forest area south of the Escarpment in the Hamilton area.  It is home to several highly significant species of birds, including the Northern Harrier and the Sedge Wren.  It also serves as a stopover for many species of migratory waterfowl and supports a heronry.  It is the only site in the Hamilton area where one will find the Edwards’ Hairstreak Butterfly, a savanna species of butterfly.  In addition, several highly significant species of plants grow within the swamp.  Because the  Vinemount Swamp is a headwaters swamp, it serves an important purpose in regulating the stream flow in Forty Mile Creek and Stoney Creek.  The Vinemount Swamp is visible from the current on-road section of the Dofasco 2000 Trail and its boardwalk through the swamp.

The Vinemount and Winona Conservation Area protect 185 acres of the Niagara Escarpment UNESCO World Biosphere Reserve. This spectacular nature sanctuary can be accessed through the Bruce Trail from the east or the west, or visitors may park at the Jones Road Bruce Trail access to enter the areas directly. Hike through a towering Carolinian forest with verdant undergrowth filled with mosses and ferns. Marvel at the sheer outcrops, scree slopes, and ancient glacial spillways of the Niagara Escarpment. The Bruce trail is considered intermediate to difficult and has rough, uneven terrain over boulders and roots as well as steep climbs. Visitors can plan an extended hike to the east to visit the Devils Punchbowl Conservation Area and witness its picturesque gorge and waterfall.